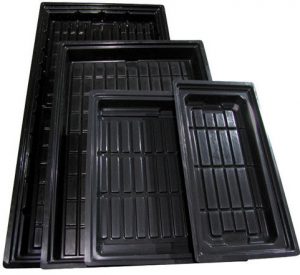 According to scientific research, gardening with the use of plastic plant trays has been suggested as safe. However, for those that are concerned about plastic, it is advisable to choose plastic that is BPA free and is no
t made out of harmful chemicals. Today, the majority of containers on the market will feature a recycling code that can assist in the process of finding plastic that is safe to use around the garden and the home.

Plastic containers that feature the labels #1, #2, #4 and #5 are considered to be a safer plastic choice. Typically plastic plant trays and gardening pots will feature the label #5. The second tip on using plastic containers is to ensure they are not exposed to excessive heat and when possible choose lighter colored containers. Chemicals such as BPA are significantly released when exposed to heat. The next tip on safe gardening would be to use a potting medium that contains high levels of organic materials. This type of material ensures that the soil is soft and maintains healthy plants as well as performing the act of a filtering-system which will assist in attracting chemicals so that they do not land up in the root system of the plants.

Other Uses For Plastic Plant Trays

Plant trays are not only useful for growing seedlings and plants, they can also be used for other uses in and around the home. Below are some of these uses.

Most gardeners will typically accumulate many garden trays over the year. The best types that can be used for other items would be the larger ones that feature raised sides. These are the types that can easily stack on top of one another. They can be washed and then used to transport muffins, cookies or cupcakes. Another great idea can involve covering the trays with wrapping paper or foil to suit a seasonal themed party, such as end of year functions or birthday parties. The trays are light weight easy to transport and can assist in transporting delicate eats that can easily break. The best part about these trays is that they can be reused numerous times and can be recycled when they become old or worn. Plastic trays are also great for storing small items such as nuts and bolts as well as for arts and crafts projects for kids or adults.